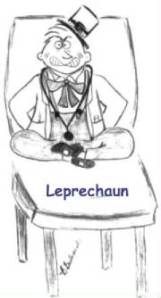 The weather was miserable today. I was up early after a night of very little sleep. How does one sleep when the legs seem to have a life of their own?

However, I had to be at an appointment with the lab in the country hospital this morning. The lab technician was great even though my veins refused to co-operate. When I go for my next blood tests I will wear tourniquets on my arms during the drive to the lab. The results of the tests taken today will be sent to the wonderful Hormone doctor in California.

I continued on to the city for my 11:45 AM appointment with the supposedly greatest endocrinologist in the city. My family doctor, Squirt, had informed me in no uncertain terms that the Leprechaun was the best and if the Leprechaun could find nothing wrong with me then there was nothing wrong with me. What a kind and reassuring statement. Just made me feel warm and fuzzy all over!

I arrived safely at the city hospital quite relieved that I had managed to stay on the road. The road conditions were treacherous. I was finally ushered into the wee little man’s office, which was actually quite large for a leprechaun. I sat down in the chair beside the desk and he said, “What seems to be your problem? Your thyroid is just fine.”

I handed him two pictures (before the weight gain and after the weight gain) and my concise symptom list. He took the list, sniffed at it and threw it on his desk. The Leprechaun then picked up my two pictures, looked at them and started to laugh. I had no idea I looked so comical! When he next spoke the words out of his mouth were “You sure are fat. You must have eaten a lot of food to have changed like that!” My response was “I may live out in the country but we do have mirrors in our houses. I know what I look like.” I asked him about various symptoms like the boils, the vision distortion, my crawling and cramping legs, the pressure in my head, the buzzing in my ears, the muscle weakness, joint pain, etc. He told me that the only reason I had all these symptoms was because I was fat.

I told him that I had gained 50 lbs. between June 2, 2000 and August 26, 2000. He flat out told me he did not believe that. The Leprechaun then made a very profound statement. (I am being sarcastic) He said, “Women like you have no idea how much food you put in your mouths.” A leprechaun should be more careful when he insults an oversized woman. I had to have a good talk with myself since my instinct at that point was to wrap his little heine around his chair.

The Leprechaun then handed me a prescription for diet pills. I told him I was not interested in taking diet pills. His last words to me where “Just take the prescription. Once you came to terms with how fat you are, you will want to take them.” Oh yes, he also informed me that he would write a summary letter to Squirt, my family doctor and tell him that his diagnosis was that I was fat!

My consultation with the highly esteemed Leprechaun lasted all of 10 minutes. I was back in my car in the parking lot at 12:00 noon.

I faced a nasty ride home in the blowing snow. Thank goodness no one could see or hear me during the drive home. I screamed, yelled and carried on like a mad woman!! What am I going to do? The great Leprechaun with the highest possible departmental standing has spoken. The Squirt can now wash his hand of me since he told me that if the Leprechaun said I was fine there was nothing wrong with me. I should mention that Squirt did warn me that if he sent me to Leprechaun for a second opinion I would probably not get a very good reception. He said, “Doctors are not very impressed with people who want second opinions!”

Thank God for the American doctor. At least he validates my symptoms and treats me like a human being.