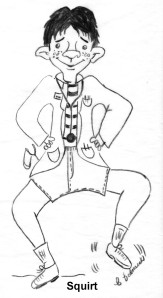 My husband called Squirt’s office first thing yesterday morning and left a message for Squirt to return his call.  He also called Dingaling’s office and left a message for Dingaling to return his call.  I think that hell will freeze over before Dingaling stoops to return a mere layman’s phone call.  Now the reason that my husband called these two chaps was because I was feeling miserable and really did not have the strength to deal with them yesterday or today.

Poor abused Squirt!  Squirt finally called my husband late this afternoon.  He then called me to tattle on my husband.  Squirt told me that my husband had been rather upset and a little bit rude.  I told Squirt that he was lucky that he had not talked to me first.  I would have been a whole lot more upset and a whole lot more rude.  I asked Squirt how Dingaling dared tell me I had right heart failure and then not bother to return my husband’s phone call.  I told Squirt that it was cruel to let me sit here for four days wondering what would happen next.

Squirt’s big excuse was that Dingaling had not called him after my Monday appointment.  See, I was right about how important my life and diagnosis are to Dingaling.  Out of sight out of mind is how  Dingaling operates.  Squirt claimed he had finally called Dingaling when he noticed my husband’s telephone message.  Whoopee ding!

The only news that Squirt had for me was the result of my PV Lung Scan.  It was clear and showed no lung disease or tumors.  Thank God for that!  All the other test results were not available as of today.

Squirt went on and on about how much he cared.  He explained how he was doing everything in his power to help me.  I let him babble on for a while and then I interrupted and told him that “trying” was no longer good enough.  After almost four years of begging for help I wanted results and I wanted them now!   Squirt told me that I always had the option of finding a new family doctor.  My answer to that was, “Do you know of a doctor who will actually listen to his/her patients?”  Instead of answering that question, Squirt went on to tell me that he felt that I was better off staying on as his patient.  I am still wondering what he meant by that.  I wonder in whose best interest it really is if I stay on as his patient.  After all it might be down right embarrassing for Squirt if a new doctor diagnosed me in a few weeks.  Mind you once these noble physicians get their medical degree, I think the capacity to experience embarrassment goes right out the window.  Doctors really have no reason to be embarrassed.  They either stumble on a diagnosis or they put a tag on your toe.

Squirt and I then had a discussion about my fluid retention problem.  Since obeying doctors’ orders and stopping the potassium sparing diuretic I was on, I have bloated to the point where my skin feels like it can stretch no more.  In fact, I have experienced shortness of breath for the very first time in my life.  Squirt finally agreed to put me on Lasix.  When I asked if this was a potassium sparing diuretic he said no.  I asked him about potential potassium problems.  He assured me that the potassium crisis I had last week was just a “one time occurrence.”  In fact he told me to stop taking the potassium supplement I had been prescribed in emergency.

Squirt made an appointment for me to come and see him next week Wednesday, January 23.  He will do a blood test to check my potassium levels at that time.

This entry was posted in Autoimmune disease and tagged dingaling. Bookmark the permalink.