Summer has come and gone for another year.  It seems as soon as September 1st rolls around the temperature literally changes overnight.  It is no longer warm enough at night to heat the pool; cools off much too quickly.  Fall happens to be my favourite time of year, spring my least favourite time of year.

The end of July and beginning of August brought back many memories of the wonderful times we spent with a dear friend Dennis Joiner.  Abbotsford businessman Dennis Brian Joiner, 49, was shot to death sometime at the end of July beginning of August 1998.  After missing for five days his body was found in a bushy area a few paces off a dirt road in the 15600-block of 34th Avenue, in Surrey, B.C.   I wonder how much longer it will take for the murderers to be publically identified.  I wonder whether there will be any deathbed confessions. It is sad and disgusting that persons who know better have spread horrible rumors and vicious lies about this kind and generous man.  You have to wonder what could possibly be their motive.  Our family has been a recipient of Dennis’s kindness, hospitality, and generosity and I am sure there are many more families that given the chance would say the same.  It is time to stop spreading these lies and rumors about Dennis.

This following probably sounds weird to those of you who do not have undiagnosed medical problems.  This past Friday I was incredibly relieved and very happy to finally receive a diagnosis after suffering from chronic pain since 1998.  The pain began after I, being ignorant of the side effects, drank Radio Active Iodine to kill my thyroid.  Graves disease, an autoimmune disease, was the reason for drinking this poison.  The rheumatologist I was referred to in July ordered tests that provided a reason for my pain.  I have arthritis in both ankles, the left ankle worse than the right.  Also, have arthritis and bone spurs in both knees, arthritis in both hips, the left hip worse than the right because of bursitis.  I have arthritis in my lower spine as well as in my shoulders.  You cannot imagine the relief to finally have a reason for the constant pain.

After my appointment with the radiologist, I continued on to the Grace Hospital for an
MRI of my poor liver.  For someone who did not drink alcohol because the alcohol caused horrendous migraines to end up with autoimmune liver disease (cirrhosis of the liver) does not seem quite fair but then who said life was fair?  Thankfully the MRI was done with contrast which gives a much clearer result.  Now I wait to see if my liver damage has remained the same or whether it has gotten worse.  Hopefully, I will know in a week.

It has been years since I have done any kind of needlework.   I have decided to spend time this fall and winter working on some petite point projects and smocking projects.  There is a special little girl that would look adorable in a smocked dress.  I started a petite point project today, the first of a series of Ukrainian dancers.  My grandson was a Ukrainian dancer for eight years.  The finished pictures will be a keepsake for him. 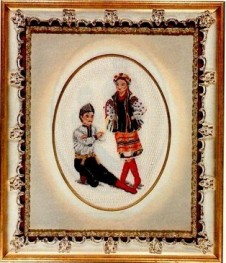