A quiet Saturday afternoon with temps about 3 C.  However there is a snow storm in the works for Monday and Tuesday.

Life takes many twists and turns and we can never be sure what will happen next.  This past summer I dealt with Pancreatitis; a real nasty disease.  I woke up on July 10th feeling tired.  By midmorning I had the most horrible pain in my abdomen.  Finally at 3:00 PM I could stand the pain no longer and had my husband take me to emergency.  Thankfully I only had to wait an hour before I was seen by the emergency doctor.  However he and his side kick the male nurse on duty informed me after some blood work that I was FOS.  According to my RN relatives that is what is noted in the chart of a person with constipation.  Nothing helped the pain and I was held in observation overnight.

My family doctor arrived at the hospital early Monday morning and apologized for the lack of pain control I had received in emergency.  She very quickly fixed that problem.  I was also informed at that time that I had Pancreatitis and would have to remain in hospital.  Apparently my pancreatitis was brought on by a stone from the my gall bladder blocking the duct to the pancreas.  After 12 days of nothing to eat or drink, two ambulance rides to Winnipeg for MRI’s I was finally released after almost 3 weeks.  I had gall bladder surgery in Winnipeg on September 9th.

The best outcome of all of this was that I suddenly began to loose weight, something that I thought was no longer possible.  At present I have lost 45 lbs. Mind you I have been following the pancreas diet published by the Mayo Clinic ever since my surgery.

I have been plagued by cataracts for some time.  Two and half years ago I was told that I would need to have them removed ASAP, especially the one in my right eye.  Well I finally got notification of my surgery date which is to happen in May.  A two and a half year wait is hardly considered an emergency but then what do I know.

The pain in my bones and muscles continues as does the dizziness.  It is so annoying to suddenly feel the loss of balance.  Luckily so far the falls have not done any permanent damage.

Well I shall get back to my reading.  Had a mammogram on Tuesday.  Stopped in at Chapters on the way home and was sorely tempted and could not resist buying too many books.  Oh well I shall have saved my sanity for another few weeks by keeping my nose in my new books. 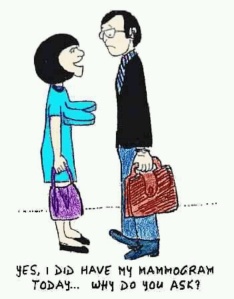