Several sites are now offering DNA profiles for a price.  Ancestry.ca is such a site.  I have always been curious about my background; where I came from and what kind of people made up my genetic family.  I was adopted in 1948 at the age of 6 months.  In those days the powers that be must have considered a detailed medical history unnecessary.  All my adoption papers said was that there was no mental illness or venereal disease in the family.  Weird but then it was 1948 and just after the war.

To make a long story short, my dad while at an auction sale in a small town about 40 miles from where I grew up helped an elderly woman pull a wagon full of plants across the street.  They introduced themselves and when my dad heard the lady’s last name he asked if she knew of a baby given up for adoption about 35 years ago with the same last name.  She said no at first but later, just before she left for her house and my dad returned to the auction sale she asked him to bring me along to her estate sale which was happening in three weeks.  She told my dad she wanted to see me again.

After much persuasion, I consented to go to this lady’s estate sale which was a bizarre experience, to say the least.  My dad went ahead in his truck and my mom and I followed a short time later.  When I walked into the lady’s yard everyone went silent even the auctioneer.   My mom and I were taken into this summer kitchen and I was introduced to “relatives”.  Several of the older women started to cry.  They knew my birth mom and told me that I looked exactly like her.

This meeting at the auction site led to me meeting my birth mom, half-sister and one of my birth mom’s cousins.  After some time my birth mom and I went to the offices of Child and Family Services and it was confirmed that she had given birth to me.

My birth mom could not for reasons I do not know tell me the real name and the truth about my birth father.  While living in British Columbia I did a lot of research and found who I believed to be my half siblings.  My birth father had passed away a number of years before I found his family.  However, I had never had official confirmation that this man was indeed my birth father. 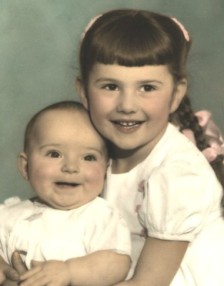 My mom and dad adopted my sister four years after they adopted me.  I remember going to the nursey at the Women’s Pavilion in Winnipeg to see my new, 10-day old sister.  A kind nurse had invited my dad and me to come in to see the new baby.  I also remember that my dad and I were “chased” out of the nursery by the head nurse who was very upset that a “child” had been allowed into the newborn nursery.  My dad and I went to the park across the street while we waited for my mom to get my sister ready to take home with us.  My sister and I were adopted by a wonderful couple who truly loved us.

Back to my Ancestry.ca story.  My son and daughter in law gave my husband and me DNA kits from Ancestry.ca for Christmas.  My husband got his results two weeks ago but I was told that they were unable to get a profile from the sample I sent so I would have to redo it.  Even though my husband can trace his family back to the 1600’s there were a number of people with similar DNA profiles; people that were unknown to him.  Last week my son and daughter in law got their DNA profiles.  My son called us the day he received his and wanted to know how he could be related to a woman I will call Jane Doe; not only be related too but closely related as a sister or aunt.  I knew immediately who he was talking about.  Jane Doe was the only daughter of my birth father and my half-sister.  What made this so important to me was that I now have official confirmation that I was right about the identity of my birth father.  It truly is a small world.

You have to wonder how many secrets will be uncovered with these DNA profiles.  I did not realize when sending in my DNA sample that I would be given the names of people who had similar DNA profiles.

At the beginning of February, we noticed a feral cat that seemed to live under our deck.  Being the animal lovers that we are we immediately bought cat food and put out some blankets and a bowl of food for this poor creature.  My husband named the cat “Lollipop”.  It did not take long and Lollipop was joined by other stray cats.  It became a daily ritual to make sure the food bowls were filled.

To keep track of Lollipop and her “gang” my husband set up an infrared camera outside and a TV screen inside so we could watch the cats enjoying their buffet.  The neat thing about this camera was that it was capable of filming in the dark giving us a lovely clear video.  The first night the camera was up you can imagine our surprise at what popped up on the camera once the cats had finished their nightly feast.  Check the video below: